One of the rarest forms of the mineral species beryl, morganite was commonly known as the “pink emerald” before being renamed in honor of financier J.P. Morgan. Exhibiting a range of pink hues, morganite has been gaining a presence in engagement rings. The soft and subtle color of the gemstone has gained its reputation for evoking a sense of inner joy and peace.

The appeal of morganite is based in its pastel beauty and appealing price tag. However, as a member of the beryl family, just like emerald and aquamarine, morganite isn’t your best choice for an engagement ring. A lovely gemstone with a fun history, our guide to morganite will discuss everything to know about this stone and why it’s better suited for jewelry other than your precious ring.

A Short History of Morganite

With its discovery on Madagascar by famed gemologist George F. Kunz, morganite was introduced to the mineral world in 1910. Kunz was the Vice President of preeminent jeweler Tiffany & Co. and an avid gemstone and mineral collector. He shared a friendship and passion for fine gemstones with Tiffany’s top patron, J.P. Morgan.

J.P. Morgan was the American banker and philanthropist behind several early corporations and built the banking firm that carried his name. By 1900, he had developed some of the most impressive gem collections in the United States. The collections toured the globe at World’s Fairs and were eventually donated to the American Museum of Natural History.

Kunz had been a major part of assembling these collections for Morgan and wanted to honor the man and his work to promote gemology and mineralogy. With his discovery of the pink beryl, Kunz convinced the New York Academy of Sciences to recognize Morgan for his patronage by naming the gemstone morganite.

This early specimen of morganite set the standard for the most prized color of the stone: a deeper magenta hue. A trademark color to be found in Madagascar, most other forms of morganite are in the light pinks and salmon range of pastel shades. For this reason, gemstones from Madagascar featuring a deeper hue and saturation in morganite are highly coveted by collectors.

While it’s not unusual to find samples of morganite in large sizes, one of the largest specimens of morganite ever discovered was still a big surprise. Pulled from the ground in a mine in Buckfield, Maine, the piece of morganite that came to be called “The Rose of Maine” weighed in at 50 pounds. Measuring approximately twelve by nine inches and about 115,000 carats. Even more of a surprise, upon exposure to sunlight, the specimen turned from a dark orange to pink.

These days, most morganite is coming from mines in Brazil with other sources primarily in Africa. The Madagascar mines that produced the namesake for the stone has dwindled greatly in yield, although what is found there continues to be seen as an example of high quality for a morganite.

Just as emerald and aquamarine, morganite comes in at 7.5 to 8 on the Mohs Hardness Scale. The color of morganite is a result of the trace mineral manganese being present at the time of crystal formation. It provides the subtle pastels the gemstone is known to exhibit.

As with all colored gemstones, color ranks as the most important characteristic of morganite when considering its quality and value. And while the color can cover a range from orange to pink to magenta, darker pinks with some saturation are often more prized. However, as the stone is becoming more popular, serious collectors are preferring a peachy-colored morganite left in its untreated form.

Morganite can exhibit a very distinct pleochroism, meaning the color can appear to change when viewed at different angles. Because the stone is so light in its color, the color shift from pleochroism can look drastic, in some cases from a pale pink to a deep bluish-pink. For this reason, how the stone is cut tends to be very important.

Aside from cutting to minimize pleochroism, cutters working on morganite seek to enhance color and brilliance. With an excellent clarity and luster when cut and polished, morganite is most often cut into rounds, ovals, and cushion shapes. Also, since morganite is typically found in larger crystal specimens, cutters aren’t as concerned with preserving carat weight, so cuts can be more focused on the most appealing look. 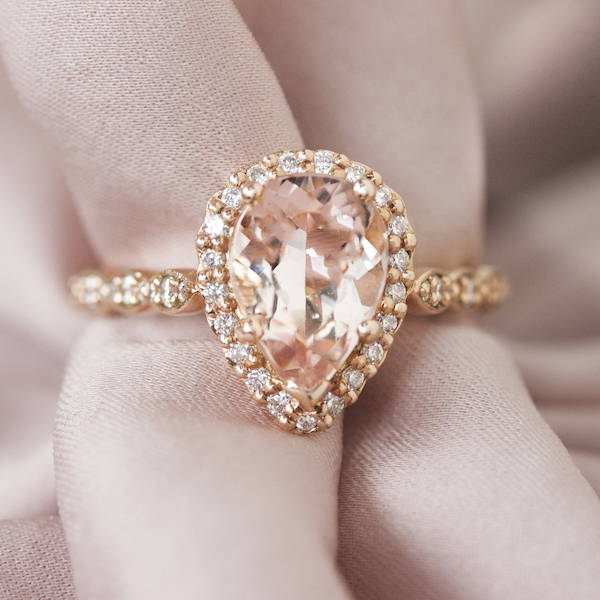 Faceted morganite usually has no visible inclusions, practically guaranteeing every gem-quality stone an eye-clean rating. Morganite rough is often found in flawless or near-flawless crystals and in quite large sizes when compared with other members of the beryl family.

Larger carat weights are so common with morganite that miners in Brazil are used to finding crystals as large as twenty plus pounds. While technically more rare than aquamarine, because the demand isn’t as high, the supply of large morganite stones is plentiful and quite cost effective. However, it is likely only a matter of time for prices to begin to reflect the rarity and increasing appeal as morganite becomes more popular.

All treatments performed on morganite are to change and enhance the color. While darker magentas and peachy salmon-colored morganites are highly sought after by collectors, the general jewelry-buying public prefers a pink hue.

When mined from the ground, morganite is more typically an orange to peach color. With heating, the unwanted yellow tones are removed, leaving a pink morganite. Heating is done at a relatively low temperature and remains permanent. While heat treatment for morganite is widely accepted in the industry, and not harmful to the integrity of the stone, as with all gemstones, any type of treatment should be fully disclosed.

Morganite has been building in popularity over the last few years and has become an often talked about choice for engagement rings. Some in the industry may even go so far as to say it’s a wonderful alternative to a pink diamond. While lovely, morganite simply doesn’t have the characteristics of a stone meant for longevity, like a diamond.

Our experience has shown us that morganite, like its beryl counterparts of emerald and aquamarine, can’t stand up to constant wear. Morganite will be more prone to scratches and chips, and collect dirt and oils more quickly through daily wear. So if morganite is your gemstone of choice, be prepared for more regular and rigorous cleaning measures to ensure it stays looking like new.