From its first discovery, moissanite was believed to be diamond. The natural form of moissanite is incredibly rare and so today, the moissanite we know is man-made. As the second hardest mineral in nature and its similar look to a diamond, moissanite engagement rings have been growing in popularity at a rapid rate.

The appeal of moissanite is based in its clear beauty, diamond-like appearance, and affordable price tag. And as a gemstone with an extra-terrestrial origin, it offers a uniqueness that few other stones can match. In our guide to moissanite, we’ll discuss everything to know about this stone and how to find the perfect one for your engagement ring.

A Short History of Moissanite

Around fifty thousand years ago, a meteorite crashed into the Arizona desert creating what came to be known as “Meteor Crater.” The size of the crater was found to be almost three quarters of a mile in diameter and over five hundred feet deep. Throughout this crater and for miles in the surrounding desert, meteorite fragments were scattered.

In 1893, Nobel Prize winning, French chemist Henri Moissan isolated fragments of the meteorite that contained a brilliant-looking substance. Originally believing it to be diamond, Moissan performed extensive research on the mineral eventually concluding in 1904 that it was made of silicon carbide.

George Kunz, the same man responsible for discovering and naming morganite, suggested in 1905 that this new gemstone be named in honor of Dr. Moissan. Because finding the mineral in its natural form was exceedingly rare, it did not immediately appear in any jewelry. In actuality, it took almost another century for moissanite to be considered for jewelry, all due to one company’s pursuit to recreate the gemstone.

In the late 1980s, a company now known as Charles & Colvard received patents to create and market lab-grown moissanite gemstones. In 1998, the company revealed their man-made moissanite to the world after years spent refining the process to capture the mineral in all its natural beauty and strength.

Aside from jewelry, moissanite has had a significant impact in advancing products in other industries like semiconductors, drilling tools, and abrasives. In 2015, Charles & Colvard’s patents began to expire and other companies started the process to enter the market. Today, they are still considered to be the leaders in the industry for exceptional quality moissanite as they continue to innovate and perfect their process and product.

Moissanite gemstones are the second hardest gemstone behind diamonds. While diamonds are rated at a 10 on the Mohs Hardness Scale, moissanites rate a 9.25-9.5. This means that it’s uncommon to scratch a moissanite with daily wear.

Special features of a moissanite are its brilliance and fire. A gemstone’s brilliance is determined by its refractive index, and moissanite is the world’s most brilliant gemstone. This means moissanite will reflect the most amount of light out of the crown of the stone, even slightly more so than a diamond.

While diamonds and moissanites look incredibly similar, they will act differently in very specific ways. Because of the very controlled environment and creation process in a lab, moissanite in the marketplace falls into one of two color categories: colorless and near colorless. To compare with diamonds, color grades D, E, F are referred to as colorless or super premium and the grades G, H will be near colorless or premium. The colorless version of moissanite exhibits a clear, icy white while the near colorless gems will have a very slight yellowish body color. To understand more about, read here for the differences between lab diamonds and moissanites.

Clarity in a moissanite is essentially flawless since they are manufactured by Charles & Colvard to a high quality standard. That means that there should not be any visible inclusions even at 10x magnification. As a result of all these qualities, moissanite is capable of being fashioned as a beautiful gemstone in just about every cut and shape. 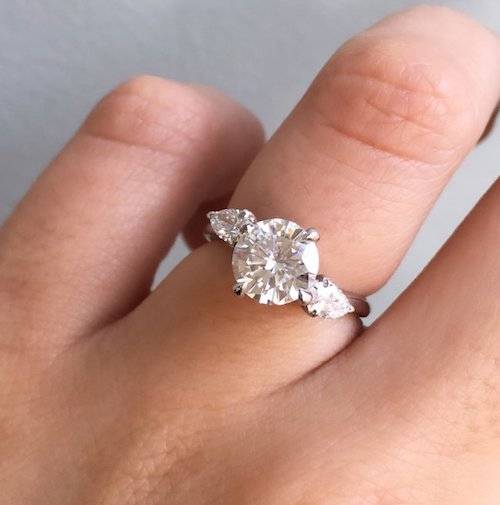 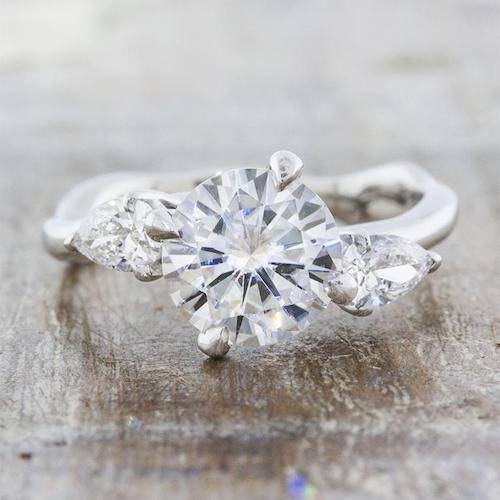 To avoid confusion and streamline the process of diamond comparison, moissanite size is expressed as a measurement in millimeters and the diamond equivalent weight (DEW) in carats. The price of moissanite is also likely to be less than one tenth the cost of a similar appearing and rated diamond.

Moissanite is entirely created in a controlled laboratory environment through a combination of science and art. While Charles & Colvard retain proprietary information about specific technology and equipment used, we do know that the manufacturing process is highly precise and takes two to three months to create one gemstone.

But since this formation process takes place entirely in a lab, the environmental impact is minimal when compared to mining a diamond from the earth. Likewise, since the supply chain is vastly diminished, moissanite stands as one of the most socially responsible gemstones you can choose for your engagement ring.

Moissanite has been increasing in popularity over the last decade. Now, it’s recognized as an excellent choice for an engagement ring. By displaying many of the same characteristics of a diamond in its hardness and alluring sparkle, moissanite can stand up to all the stressors of daily wear without requiring extra care.

In our experience, moissanite is one of only two gemstones, along with lab-grown diamonds, that we recommend as an alternative to mined diamonds for your engagement ring. A moissanite will provide a crystal clear color, clarity, and longevity in an engagement ring that can be passed down for generations. 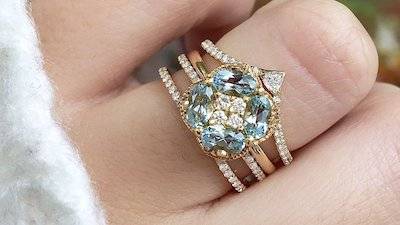