Sapphires have been a popular gemstone for centuries. Known around the world for its vibrant blue hue, sapphires can actually be found in every color of the rainbow except red - those would be rubies. Favored by royalty, sapphires have a unique history and display a lot of durability in a precious gemstone.

Returning as a popular modern choice, sapphires can provide a special pop of color and personality to your engagement ring. But there is much to know when considering a sapphire for your engagement ring. In our guide to sapphires, we’ll explore everything you need to know about this special stone to see if it’s right for you.

A Short History of Sapphires

Sapphires have been around for all of recorded history. Up until the 1990s, when discoveries in Africa brought fancy-colored sapphires into the mainstream, blue sapphires were it. Dating back to ancient Greece and Rome, kings and queens prized sapphires for their protective properties. Common lore held that sapphires protected the wearer from envy and harm.

During the Middle Ages, clergy wore blue sapphires as symbols of heaven. Famed ruler of the 9th century, Charlemagne the Great, was known to wear a talisman set with two large sapphires. This piece was at once a sign of religious devotion and thought to protect the ruler from danger.

Royalty the world over has had a fondness for sapphires, and perhaps no modern piece of sapphire jewelry is more famous than Princess Diana’s engagement ring. Set with a 12 carat oval blue sapphire surrounded by 14 solitaire white diamonds, the ring is now worn by Kate Middleton, Duchess of Cambridge since her engagement and marriage to Prince William. 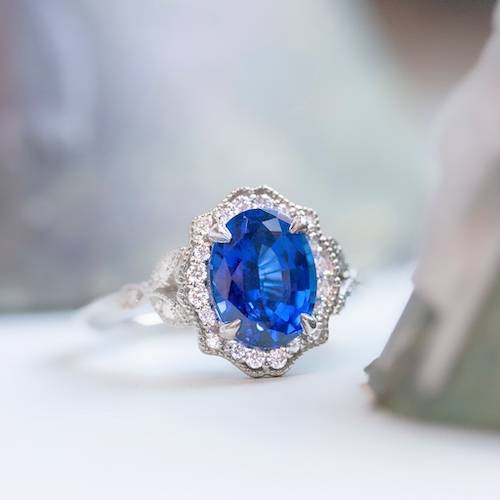 All sapphires are considered quite strong and durable, coming in at a 9 on the Mohs Hardness Scale. But sapphires are known for their natural inclusions, making them slightly more susceptible to chips than a diamond with a 10 hardness grade.

As for the inclusions in sapphires, they are a natural and expected feature of the gemstone. For that reason, the best appearing stones are rated as eye-clean, meaning no inclusions are visible to the naked eye. Experts rate clarity by assessing the size, number, location, and visibility of the inclusions.

These inclusions and the trace minerals present at the time of formation give sapphires their color. Made of the mineral species corundum, sapphires are formed deep within the earth’s crust as corundum and trace minerals cool over time. The type of mineral present will determine the color of the sapphire produced.

When it comes to cutting these gemstones, the cut of sapphires isn’t as precise as what’s required for diamonds. The guiding principles for sapphire cutters start with maximizing the color of the gem. It’s the most important feature of a sapphire and a skilled gem cutter has a lot of control of the end result. Often, the cutting will also need to strike a balance for optimal color with minimizing the appearance of inclusions.

Carat weight in sapphires also has some differences when compared to diamonds. Not in how they’re measured, but in supply. For example, due to their formation, yellow and blue sapphires are much more plentiful in larger carat sizes when compared to padparadscha or Montana sapphires, which can be extremely difficult to find in weights over three carats.

Blue sapphires are the most coveted and well-known shade of sapphire gemstones. The blue color of sapphires comes from the mineral titanium being present at the time of crystal formation. Dark vivid blues are often referred to as a “royal blue”. But “cornflower blue” has been the term to describe the most prized blue sapphire color throughout history. This term has often been applied to sapphires originating from the region of Kashmir in Central Asia.

Currently, just about every shade of blue sapphire can be found with many popular light, pastel shades being mined in Montana. Sapphires are dichroic stones, meaning their color can shift based on the angle of viewing. This effect is often seen in blue sapphires, which can appear almost purple or violet from one angle while from another they could be slightly green-blue. 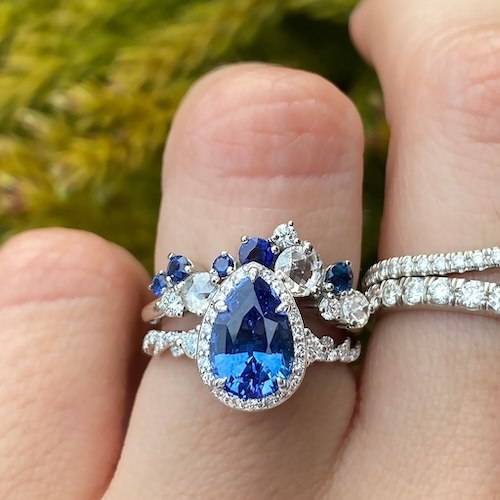 Yellow sapphires are most highly prized in a vibrant, canary yellow hue. The most common trace mineral to produce the yellow shade is iron. Because of this specific mineral, yellow sapphires are prone to feather-type inclusions and will often be heated to reduce or remove their appearance. 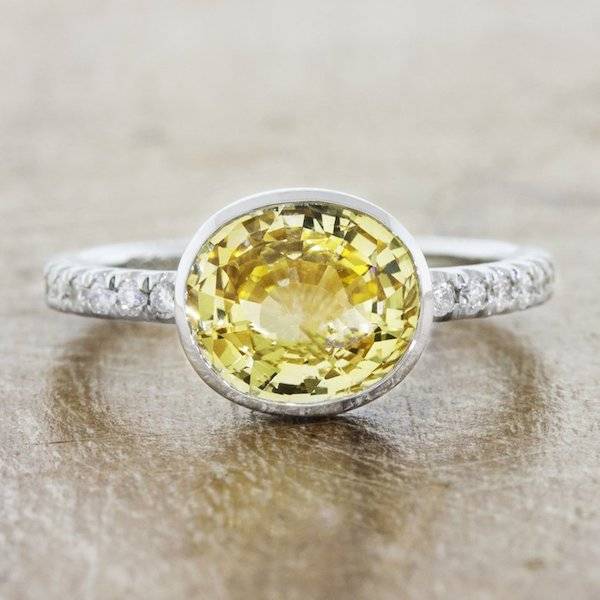 Pink and peach-colored sapphires are created from the presence of the trace mineral chromium. Very high levels of chromium will produce rubies while lower concentrations give us pink sapphires. The range of pink hues extends from light and subtle baby pinks to intense magentas. The most popular and rare colors tend to be more intense with higher pink saturation. 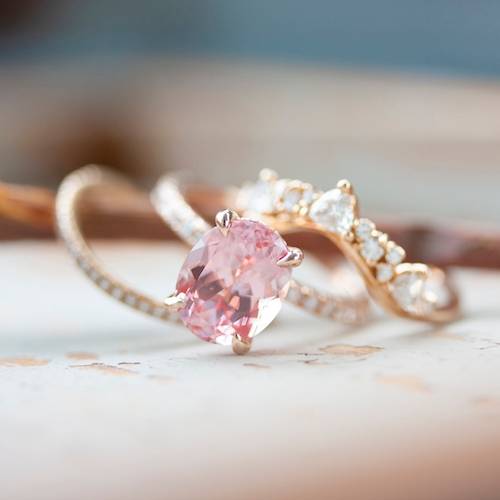 Padparadscha sapphires need the presence of both iron and chromium to create their unique hue. A striking mix of pink and orange, the word “padparadscha” is ancient Sanskrit for describing the color of tropical lotus flowers. The rarest color to be found in a sapphire, there are no specific guidelines for determining a sapphire to be padparadscha instead of simply a pink or orange sapphire. This has led to an insistence by some experts that true Padparadschas only come from Sri Lanka. 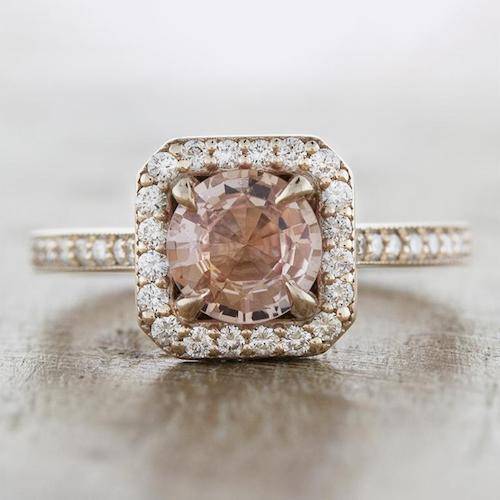 We feel Montana sapphires deserve a special mention as the only significant sapphire mining location in the United States. Early discovery of sapphires in Montana dates back to the gold rushes of the 1860s, but they were passed over as a nuisance stone in the search for gold. It wasn’t until close to 1900 that their value was discovered and sapphire mining began in earnest.

Many Montana sapphires are not heat-treated as they come out of the ground with appealing color evenly spread throughout the stone and they tend to not respond well to treatment. Today, most people will know these stones for their popular bluish-green or greenish-blue colors. We personally love their unique colors and how they are so reminiscent of nature and the sea. Finally since they are mined in America, where regulations are stricter, Montana sapphires are sourced and mined with higher wage standards and environmental considerations. 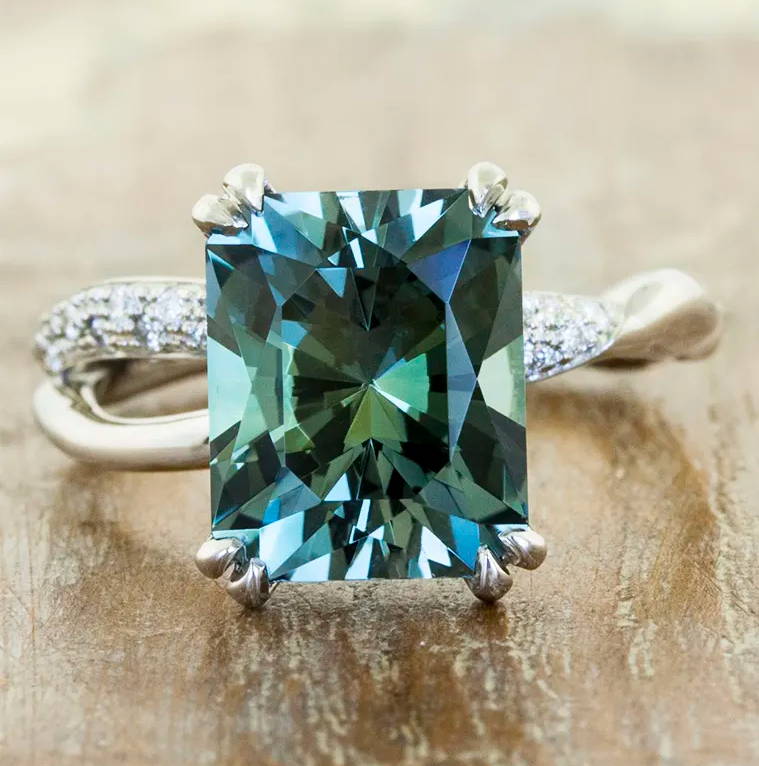 White sapphires are technically colorless, so they don’t have any trace minerals in their crystal formation to create color. A rare form of sapphire, they have long been considered to be a diamond substitute. However, the colorless nature of white sapphires actually leaves them a bit dull and milky in appearance - not nearly as bright and transparent as their color sapphire counterparts. 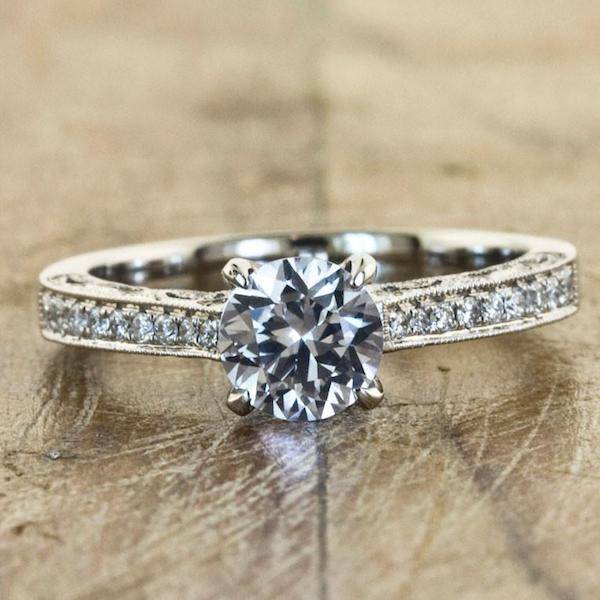 Throughout history sapphires have been subject to treatments to enhance their clarity and color. In some instances, the treatment is mild and only produces subtle changes in the stone. However, there are times when intense treatments may dramatically change the stone and have lasting side effects.

Sapphires continue to be found all over the world. As of 2007, Madagascar has been the world leader in sapphire production overtaking Australian mining. When coupled with supplies from multiple Asian and African countries, natural, quality sapphires are likely to continue their widespread appeal and appearance in all types of jewelry.

At Ken & Dana Design, sapphire is our favorite natural gemstone to work with as a diamond alternative. As a harder stone, they rarely present a problem for any type of setting and are relatively easy to source to match a dreamed-about color. They truly offer a lovely rainbow of colors to choose from to make something truly original, and have beautiful sparkle and transparency in the final piece.