Emeralds are ancient gemstones and highly prized by some of the earliest civilizations. Long associated with royalty and status, the emerald has inspired poetry and songs, myths and legends. Throughout time, they have been believed to hold healing powers, protect against injury, and be the key to eternal life.

The beauty of an emerald is largely due to its lush and rich green color. An emerald engagement ring would be a very unique choice, but perhaps not a wise one due to certain specific characteristics of the gemstone we’ll cover below. In our guide to emeralds, we’ll explore everything you should know about this stone and the types of jewelry best suited to show it off.

A Short History of Emeralds

As with other precious gemstones, emerald was one of the first minerals to be coveted by many of our earliest cultures. The word emerald is derived from a Persian word zumurrad meaning “green gem”. Believed to have been discovered in Egypt, the first emerald mines came to be called the Cleopatra mines after the Egyptian ruler who loved to adorn herself with the green gem.

The Egyptian mines were the source of emeralds in Europe throughout the Middle Ages until the era of sea exploration. Spanish conquistadores learned of vast emerald reserves from the Aztec and Incan civilizations in the New World. These cultures believed emeralds were sacred and a gift from the earth incorporating them into all their rituals.

The Muisca Indians of Colombia long treasured the emerald, believing the legend that it was an ancestor to their tribe. When explorers encountered these Central and South American civilizations, they were introduced to an emerald of superior size and quality than had ever come from Egypt. These emeralds quickly traveled throughout Europe and Asia as highly sought-after gemstones by rulers, emperors, and religious leaders alike.

A member of the mineral species of beryl, many green stones once prized as emeralds have been determined to be green beryl. In fact, many of the stones retrieved from the Egyptian mines were later decided to be green beryl and not emeralds. As a result, it’s no surprise that the rich, green hue of Colombian emeralds created a boon in emerald mining and consumption.

Today, some of the most impressive emeralds appear in museums and royal collections around the world. Perhaps one of the most famous emeralds never actually made it into any jewelry. Dating from 1695, the Moghul Emerald is a 217.80 carat square cut gemstone carved on both sides. The front features a Muslim prayer while the back is adorned with an intricate floral carving. Meant to be carried as a talisman, this piece sold at auction in 2001 for $2.2 million.

The color of emeralds is a defining feature and critical component in determining an emerald’s value. An emerald’s color is due to trace minerals of chromium, vanadium, and iron. But as with all colored gemstones, there is much to be considered when it comes to understanding how a balance of color is achieved.

The ideal color of emeralds is generally defined as medium to medium-dark, strong to vivid bluish-green to green. That sounds like a lot because the discussion of color happens through the interplay of a combination of characteristics: hue, tone, and saturation.

Hue describes the gemstone’s basic color. Tone is the range of a stone’s color from light to dark. And saturation is how pure or intense the color appears. So when assessing an emerald’s ideal color, “bluish-green to green” refers to the hue, “medium to medium-dark” is the tone, and “strong to vivid” addresses the saturation.

Emeralds are a softer gemstone. They are graded at a 7.5 to 8 on the Mohs Hardness Scale. This means they are much more susceptible to scratches, chipping, and breaking. Much of this is due to their crystal structure and the presence of natural inclusions. 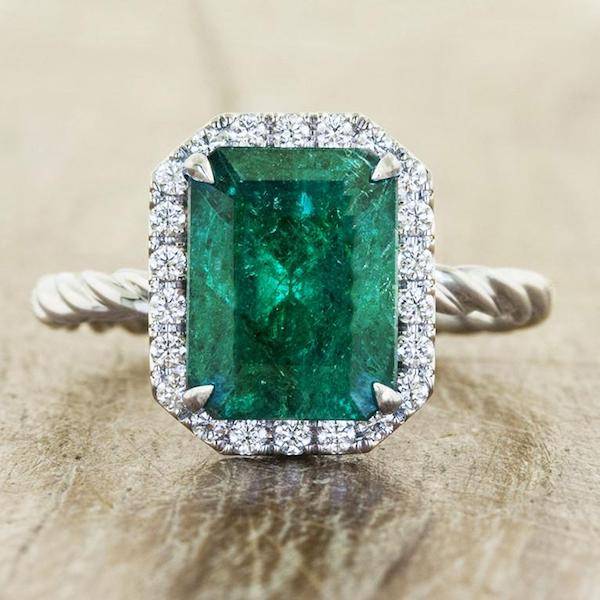 Inclusions in emeralds are extremely common. They are referred to as the emerald’s jardin, or its garden. One can imagine a pattern of twisting vines and leaves making up the appearance of the inclusions. Their specific structure is actually indicative of the origin region of the stone.

The high clarity found with diamonds will never be the case with emeralds. These are Type 3 gemstones, a group including stones that are almost always visibly included. For these reasons, emeralds require great care when wearing, storing, and cleaning, and are not recommended for daily wear.

The cut of an emerald most often focuses on enhancing the color and appearance of the gemstone. Most emerald crystals are formulated as six-sided prisms and since emeralds are more brittle, the corners are vulnerable. All of these factors come into consideration when cutting this gemstone. It’s the reason stonecutters originated the “emerald cut” for an emerald. This type of cut reduces the pressure applied to the stone during the cutting process, so it prevents chips in the gems.

Carat weight in emeralds is measured just as diamonds since it’s a universally accepted expression of weight. Emerald rough is very expensive and delicate, so cutters often have high on their consideration the need to conserve as much weight as possible and not harm any structural integrity. Fine-quality emeralds are available in a range of carat sizes, but as the emerald increases in size, the price per carat goes up significantly as well.

Emeralds are known for their inclusions that often extend as cracks and tiny fissures to the surface of the stone. It’s a common practice among dealers to oil the surface to keep them looking their best. For this practice, emeralds are usually soaked in certain oils to fill the fractures and smooth the appearance of the surface.

Besides oils, natural and synthetic resins have begun to be used since the effects of their treatment lasts longer. In this instance of fracture filling, the resin is introduced into the fractures to dry and act almost as a glue to hold the emerald together with greater stability. However, these can all be prone to drying out, cracking, or even changing color over time with wear and exposure to different elements.

Today, emeralds still maintain their appeal and are heavily imported in the United States and Japan. Colombia remains one of the largest supplies of gem-quality emeralds with Brazil and some African countries like Zambia and Zimbabwe following close behind.

In our experience, while emeralds are a beautiful gemstone, they simply aren’t suited for engagement rings that are meant to be worn for 50+ years and passed down to future generations. They’re far too soft and brittle for everyday wear, and would be a much better investment when set as a necklace or pair of earrings. But even then, only if you’re prepared to do the maintenance involved with keeping emeralds in their top form.