Aquamarine is a wonder of nature with its clear, ethereal blue and green tones. Derived from the Latin words aqua marina, meaning “sea water”, it’s no surprise that these gems are valued for their appearance as a calming and serene stone. Even with time, aquamarine is still felt to deliver its wearer feelings of happiness, courage, and clarity of thought through its clear and cheerful look.

Aquamarine is loved for its sky-blue and sea-green hues. A member of the beryl family, just like emerald, an aquamarine isn’t the best option for an engagement ring due to its softness and other features we’ll cover below. A beautiful gemstone with a unique history, our guide to aquamarine will cover everything to know about this stone and what to consider when choosing one.

A Short History of Aquamarine

For at least 3000 years, aquamarine has been used in jewelry and as a talisman to protect the wearer from negative forces. Egyptian and Sumerian civilizations prized aquamarine as a symbol of happiness and believed it could provide everlasting youth. These attributes are why aquamarine has been found in many tombs and burial pits of early civilizations to help usher their dead into a wonderful afterlife.

With its color and transparency being immediately reminiscent of water, early sailor lore held that it was a “mermaid stone” to be found in undersea treasure troves. For this reason specifically, sailors often took an aquamarine on their voyages for luck and safe travels. It is commonly believed that Roman fishermen were the first to call the gemstone aqua marina, and credited the stone for any abundant catches.

As with all gems, people often attribute healing powers to them, especially during the Middle Ages. In the twelfth and thirteenth centuries, aquamarine was often used as an antidote to poisoning. Because of this, it became a more popular stone for nobility to wear and have on hand in its natural rough crystal form.

Adored by gem and mineral collectors, aquamarine can often be found in art and as large carved pieces. Since it is common to find beautiful aquamarine stones in large sizes, one stone can result in many smaller stones, sometimes each multiple carats in size.

The largest faceted aquamarine in the world is the Don Pedro Aquamarine, currently on display at the Smithsonian’s National Museum of Natural History. At 10,363 cts. and almost 36 cm in length, the stone is faceted and cut in a lovely starburst pattern. Another famous aquamarine was gifted to Eleanor Roosevelt from her husband, Franklin Roosevelt after visiting South America. The 1,298 carat aquamarine was a stunning dark blue and the largest cut stone of its kind in 1936.

Aquamarine is abundantly found in Brazil, which has been the source of the majority of supply for nearly three centuries. While Brazil is the leader, aquamarine has actually been mined on almost every continent with some significant contributions from African and Asian countries.

As a member of the beryl mineral species like emerald and morganite, aquamarine is a softer stone, coming in at 7.5 to 8 on the Mohs Hardness Scale. This is one of the reasons it’s so suitable for being carved. The color of aquamarine is produced with the trace mineral of iron being present in the crystal formation.

Color ranks as the most important characteristic of an aquamarine when considering its quality and value. Described as covering a range of pastel hues, darker blues and greenish blues with more saturation are often more prized. But aquamarines can be prone to color zoning and unevenness of color. So consistent color throughout is ideal.

As with other colored gemstones, aquamarine is pleochroic, meaning the color can appear to change when viewed at different angles. Because the tone of aquamarine can be so light, this feature is much more apparent in darker stones.

One of the most appealing features of aquamarine is its clarity. Due to the way that they are formed, the stone is often found in flawless or near-flawless crystals. This allows for gemstones of multiple sizes and carat weights to be produced with lovely transparency and eye-clean quality. 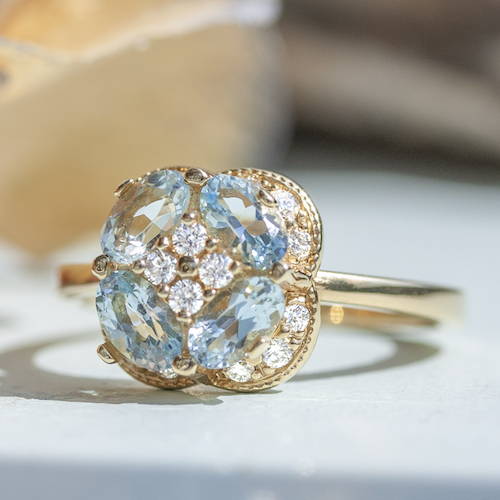 The high transparency and lighter colors of the aquamarine influence the cut of the gemstone the most. They are fairly reflective, so cutters tend to make the most of these assets. Popular cuts for aquamarine are emerald cut and step cuts as the sharp and straight angles accentuate the sparkle and direct the light to the eye.

Larger carat weights are much more common for aquamarine than a lot of other gemstones. Options that range from one to five carats and over five carats are not unheard of. Due to this availability, the price of aquamarine sees more of a significant jump in per carat cost above the five carat range.

Since aquamarine typically exhibits a wonderful clarity, much of the treatments a stone may go under are aimed toward improving color. Deep blue aquamarines are generally the most valued and stones may undergo heat treatment in order to reach that hue. In the process, a lower heat is applied to gradually deepen the color.

Much of the aquamarine that is mined is more in the blue-green color range. Heating a stone of this color in a controlled environment can diminish and even remove the green component. The color change resulting from heat treatment is permanent in aquamarine and is widely accepted in the industry. However, as with all gemstones, any type of treatment should be fully disclosed.

Aquamarine has maintained its allure to this day and can be found in a variety of jewelry. While lovely gemstones, aquamarines simply don’t have the characteristics of a stone that is meant for longevity, like a diamond. In our experience, we caution against choosing aquamarine for an engagement ring as it’s not likely to withstand the rigor of constant wear.

Aside from being more prone to scratches and chips, aquamarine gets dirty quickly with daily wear. And because of their relatively low light refraction and light color, they require much more consistent cleaning to keep them looking their best. If aquamarine is the stone your heart is set on, be prepared for higher maintenance for your ring, or use them in earrings or a simple pendant to make them less susceptible to dirt and harm.