What is a Black Diamond?

Interest in black diamonds has been a fairly recent development, so research into learning more about them has been building steadily. Black diamonds are diamonds that contain a very high number of inclusions. When you think of inclusions, you’re normally thinking of white diamonds and looking for something that has extremely minimal and barely noticeable inclusions. Well, when these tiny dark specks exist at incredibly high levels in a diamond, they will cause it to appear completely black.

This composition is very unique for a fancy-colored diamond since the color is usually formed by chemical impurities present during the diamond’s formation. Instead of any chemical being present, minute mineral impurities like graphite, hematite, or pyrite extend throughout the stone in vast quantities. So the appearance of a natural-color black diamond is typically completely opaque with a high luster that makes them appear almost metallic. 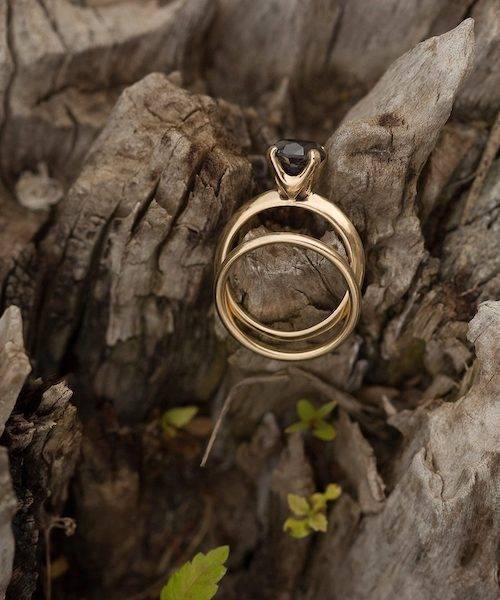 Should You Go for a Black Diamond Ring?

The world of black diamonds presents a lot of differing information from the more well-known universe of the colorless diamond. Let’s jump in to what you need to know.

Black diamonds are also not graded, instead the GIA issues a Colored Diamond Identification and Origin Report. This report describes these diamonds as Fancy black and they are designated as either natural or treated. The GIA does this for black diamonds because their color and clarity fall outside of the standard grading range, even outside of the adjusted range for fancy-colored diamonds.

Because of their opaque nature, black diamonds do not display the sparkle or brilliance that we normally associate with a diamond. Instead, black diamonds exhibit what is referred to as an adamantine luster. It gives them a shiny and smooth appearance, very similar to the way that you’d expect an emerald to look.

Not Quite Rare, But Hard to Find

Compared to other fancy-colored diamonds, especially those with pink or green hues, black diamonds aren’t considered as rare. However, that doesn’t mean they’re easy to find. Natural black diamonds are only found in Brazil and Central Africa, and it is hard to find ones with an extremely high amount of inclusions and clusters of graphite to make them deeply black all on their own.

More Fragile Than a Typical Diamond

The nature of the composition of a black diamond is such that it may contain hundreds if not thousands of microscopic fractures and inclusions. Although diamonds are well-known for their hardness and durability, this volume of fractures make black diamonds more vulnerable to breakage from sharp blows.

Most people refer to a curious stone known as carbonado as the ‘raw black diamond’. It’s more accurately described as a polycrystalline or aggregate diamond material of amorphous carbon, graphite, and diamond. That’s quite a mouthful for describing something that has a different chemical structure than pure diamond.

Carbonado has a charcoal-like look and feel to it, and there’s a distinct possibility that the substance has extraterrestrial origins. Carbonado is missing the mantle-dwelling minerals that characterize other diamonds and contains specimens of chemical and mineral mixtures that have only been found in meteors.

Black diamonds exude a modern, bold, and striking look with a lot of contrast that makes them stand out thus making them increasingly popular in men’s jewelry. Those looking for a strong and unique look for a wedding band will find a lot of inspiration with black diamonds. 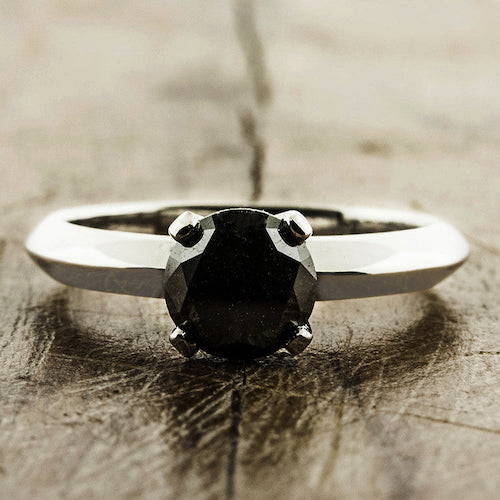 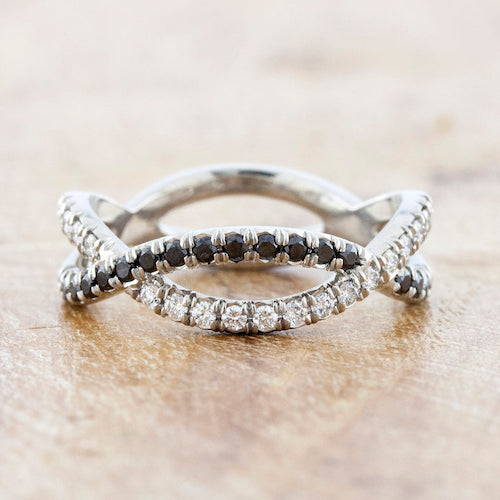 When selecting a black diamond for an engagement ring, one of the most important features to consider are surface reaching inclusions. Since black diamonds are inherently full of inclusions, cutting and polishing them can be difficult. It’s actually quite common to see facets that are pitted or exhibit drag lines from polishing.

However, if the surface reaching inclusions are tiny, they shouldn’t pose a problem. You will also want to avoid large feathers or cracks along the girdle as they will make the stone vulnerable to chipping. Beyond that, choose the black diamond that is most appealing in its characteristics and look to white gold or platinum to create a stunning contrast in color and shine.

Ultra-modern and sleek is a natural way to go for a black diamond. For our Sora, we paired a solitaire black diamond with a smooth knife-edge band in white gold for a simple, elegant and oddly mysterious ring. The bold look of a black diamond also pairs exceedingly well with a sculptural setting. Our Dahlia features a beautiful round cut black diamond set in arcing prongs of shiny white gold for a nature-inspired look complete with some added sparkle from a few small white diamonds.

Since black diamonds are so striking, they also work very well as accent stones in wedding bands. Two of our favorites are Riker – an intertwining double band resembling a wave of alternating white and black diamonds – and Thomas – a men’s wedding band with black and white diamonds in a unique grid pattern.

Sleek and sophisticated, black diamonds have an utterly unexpected and dramatic appeal. For a center stone, focus on the cut to emphasize getting a diamond that isn’t too fragile and you’re bound to end up with a one-of-a-kind statement ring! 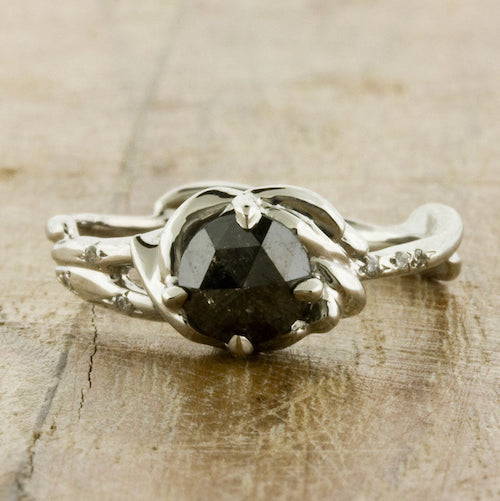 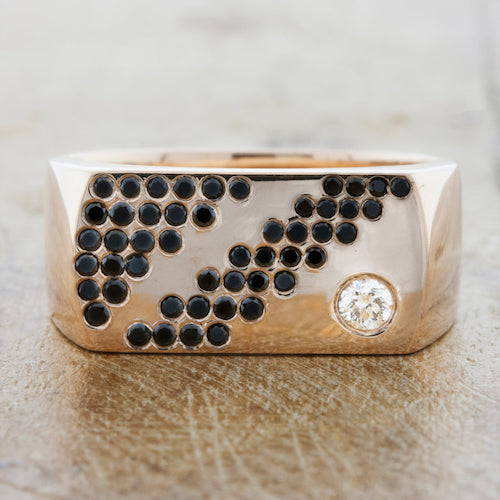