Please be advised that our studio will be closed for summer break from July 1st thru July 10th. Orders placed between 6/22 and 7/15 will require one extra week for production in addition to our standard production time.

All About Colored Diamonds

While colorless diamonds seem to dominate the jewelry landscape, colored diamonds have been experiencing a rising popularity in the last few decades. Current tastes in engagement rings have embraced unique personalizations, and colored diamonds provide a perfect way to combine a distinct taste with all the strength and durability of a diamond.

With all the added attention and consideration, questions arise about what colored diamonds really are and how they compare to their colorless counterpart. So, let’s dive in and learn all about these beautiful natural wonders and just what you can expect if you’re considering one.

What Are Colored Diamonds?

Colored diamonds, often called fancy diamonds or fancy colored diamonds in the industry, carry all the same attributes as the more well-known colorless diamond. Made from the same heat and pressure over many years deep in the Earth, they are carbon that has been formed into rough diamond crystals. Though to achieve the variety of colors, there are a few causes that are responsible.

Another event is the result of exposure to naturally occurring radioactive mineral grains over the many years of formation. These particles have the ability to knock carbon atoms out of the crystal formation causing a vacancy. This vacancy can then allow for more absorption of red wavelengths and a stronger transmission of green wavelengths. This vacancy event is what creates natural green diamonds.

The next event produces the opposite outcome of the previous example, and is also what causes earthquakes and volcanic eruptions. Diamonds that form near areas of the Earth’s interior, where there’s higher plate tectonic activity, can cause a diamond’s crystal structure to slip slightly out of alignment. This occurs across surfaces within the diamond called “glide planes” and while they don’t damage the integrity of the diamond, they change the way light passes through. This event commonly produces brown diamonds, and on very rare occasions, pink or red diamonds.

Mineral inclusions are the final event to cause the appearance of color in diamonds. A high density of inclusions that heavily interfere with the passage of light is responsible for producing some of the most popular colored diamond hues: grey, salt and pepper, and black. The inclusions usually consist of opaque minerals like graphite, hematite, and pyrite. When the minerals have a small particle size and are evenly distributed, the diamond can present an opaque appearance and highly reflective surface.

Black diamonds will present the most dense mineral inclusions with even distribution, while grey diamonds will feature less dense inclusions but still a fairly even placement. Salt and pepper diamonds feature patches of these dark minerals mixed among the more white or colorless areas.

How Do Fancy Colored Diamonds Compare to Colorless Diamonds?

Fancy colored diamonds are assessed by the same four main diamond attributes as colorless diamonds: clarity, cut, color, and carat. Although as you may suspect, color is considerably more important than the other attributes when determining quality and value. Diamond certifications are issued from the leading institutes for colored diamonds in the same fashion as they are for colorless diamonds.

Truly authentic colored diamonds will be certified as Natural on their certificate. And in order to adequately classify and grade types of colored diamonds, the Gemological Institute of America (GIA) developed a list of 12 main colors, 90 secondary hues, 9 intensity levels, and more than 230 color combinations. 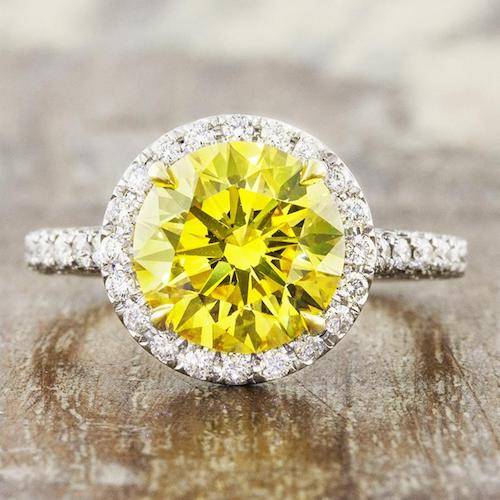 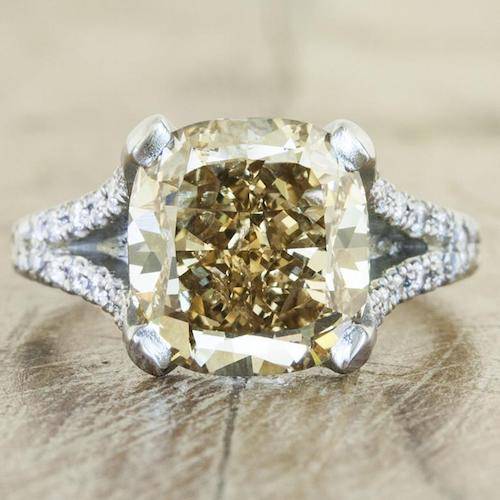 What Are the Most Popular Colored Diamonds?

Outside of serious collectors who can afford the rarest fancy colored diamonds, the most popular colors are grey and salt and pepper. These stones are full of internal inclusions that produce their appearance, so the trick is finding the ones that look appealing. Most are either lackluster with uneven inclusions or too light or too brown in color. It can be very difficult to find ones with inclusion characteristics that achieve the desired look.

Second to grey diamonds in popularity are champagne diamonds. These diamonds are graded on the color scale as between L to S, so many in the trade may refer to them as off-white colored diamonds. The price point is often very appealing for these diamonds as they cost much less than colorless diamonds but don’t have enough color intensity to be considered fancy yellow diamonds. They’re also quite appealing in color, emanating a lovely warmth with their soft yellow and cognac color mix. 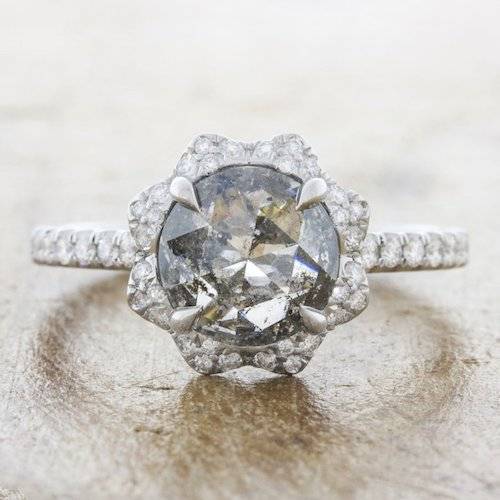 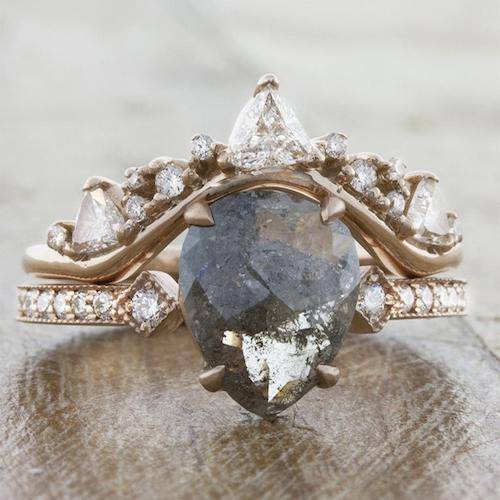 Are Colored Diamonds Treated or Manmade?

Colored diamonds are naturally occurring, but with their growing popularity, treatments to enhance or modify the color in diamonds have been developed. There are two methods into which all the treatments fit: the first uses surface treatments to modify the presenting color of the diamond, and second targets the crystal structure to introduce modifications that change the way light travels through the diamond.

The same as with colorless diamonds, when the treatment is disclosed, and understood and accepted by the person who purchases the diamond, there is nothing considered wrong with these practices. A lower price should reflect the presence of any treatments and the seller should disclose any additional care requirements they may need.

Aside from treatments, manmade, or lab-grown, colored diamonds are also available from reputable sources. The Swarovski Group, famous for their crystals, have developed a line of lab-grown colored diamonds in a range of 16 hues. Similar to lab-grown colorless diamonds, these diamonds are chemically and structurally the same, but carry the benefits of being produced in the most ethical way and with a much lower cost.

For many, the term fancy colored diamond may convey a feeling of being out of reach. But for those truly drawn to the appeal of a colored diamond, there are affordable options that deliver a beautiful appearance and quality. In our experience, working with a skilled jeweler and viewing these stones in person are guaranteed to help you find a colored diamond that’s perfect for you.