Around the world, across cultures and continents, people dream of the day when the one they love asks them to spend the rest of their lives hand in hand with them… And, of course, of the very special ring that that hand will wear as a symbol of that promise and of that love. Although engagement rings may seem a modern tradition, we actually have the ancient Egyptians to thank for this special custom. They believed the circle to be a symbol of eternity, and so would braid rings of reed to be exchanged upon their wedding day as symbols of love that would last well in to the after life. The tradition was passed on to the Ancient Romans, whose women were the first to wear rings on their left ring finger, as Roman physicians (incorrectly) believed there was a vein that ran directly from this finger to the heart.

Over hundreds of years, another tradition emerged, the proposal of marriage with a gemstone ring, a tradition that became most popular during Victorian times. From the engagement rings inspired by that of Queen Victoria in the 19th Century to those created by jewelry artists now, many wonderfully romantic styles have come and gone, and technologies in diamond cutting and stone settings have become more and more advanced.

Today, Ken & Dana Design looks to the past for inspirational designs that capture the romance, whimsy, elegance and glamour of the past 200 years, all the while infusing them with a sense of modern sophistication, and creating them with the most innovative, modern techniques available.

Perhaps the most romantic of all antique rings are Victorian rings. Queen Victoria had a famous and widely celebrated love affair with her beloved husband, Prince Albert, and they exchanged gifts of sentimental jewelry throughout their lifetime.

Victorian rings were usually gold with silver foil, which, nowadays, will appear to be darkened, making the gemstones they frame pop with a signature blackened appearance. Victorian rings will often feature older cuts like rose cuts or old European cuts, and often with a line of diamonds in a row instead of one feature stone. 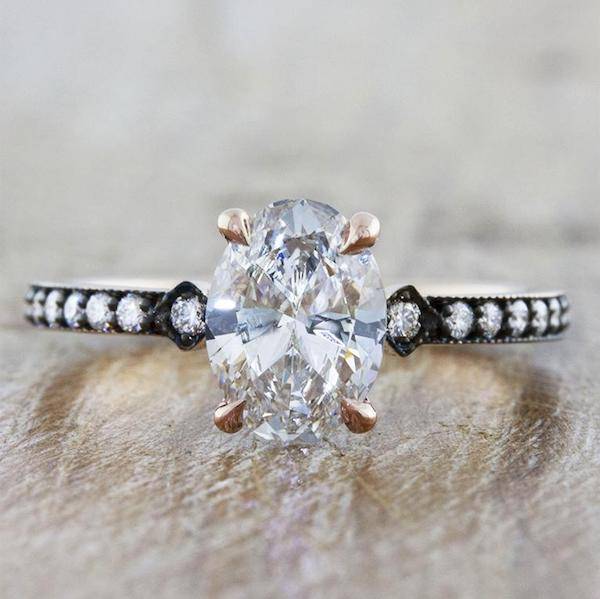 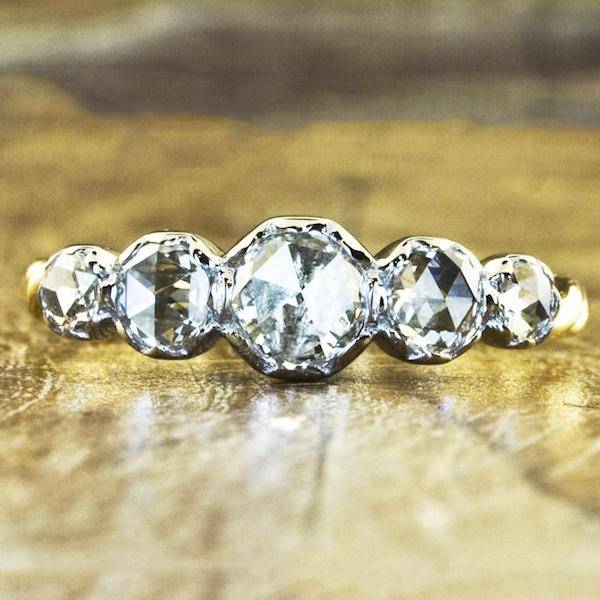 The Juliet, too, with its gorgeous five stone design and rose cut stones, incorporates Victorian elements.

Around 1900, jewelers and artisans began to grow tired of the mass manufacturing of products that had been made possible by the advent of the steam engine. They sought an art form that mimicked nature’s beauty, and celebrated the uniqueness of each natural form. This was the birth of Art Nouveau, a short lived but important movement that valued handcrafted items, unusual stones, and naturally inspired motifs. 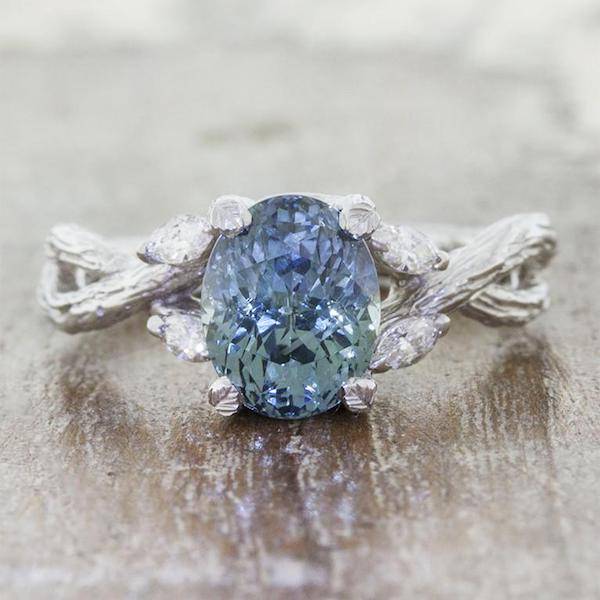 The Emery is inspired by Art Nouveau with a band made of naturally textured leafy branches that wrap romantically around each other before meeting to frame a Montana Sapphire. 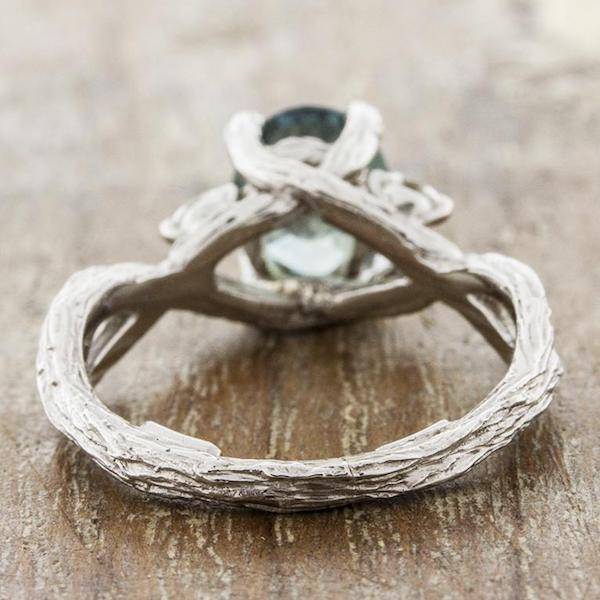 After the reign of Queen Victoria came that of King Edward, whose fun, fancy free and ultra-refined lifestyle inspired a new sense of diamond-studded elegance that looked back to the visual extravagance of the courts of Versailles. 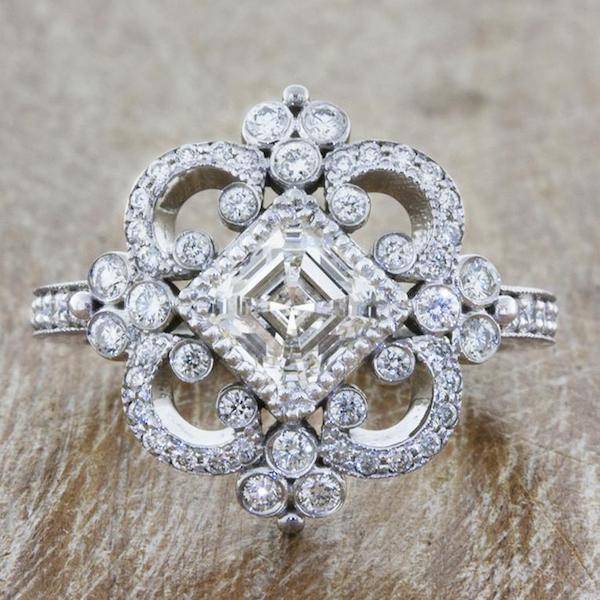 Our Florence is the perfect example of the delicate detailing, voluptuous scroll work and lush elegance that filled King Edward and Queen Alexandra’s courts. The ring features this exquisite Edwardian-inspired design with a wonderful present day detail of a finely diamond studded shank. 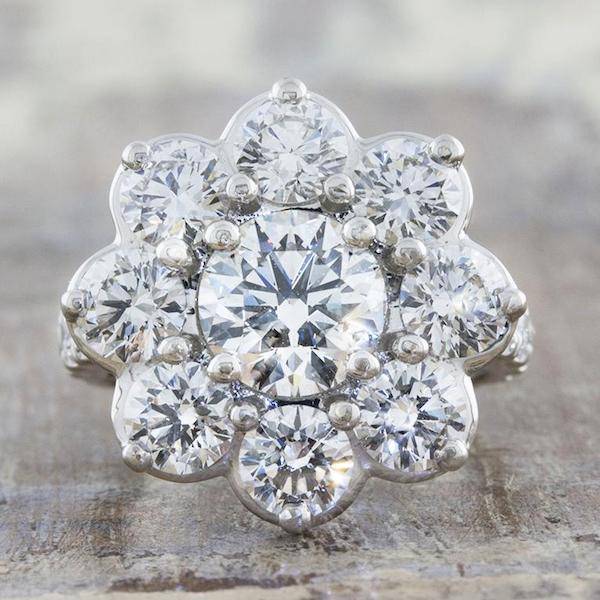 Our Katherine ring could have been right at home in elegant Edwardian dance halls; it was during this time that cluster rings in floral shapes became hugely popular, quite possibly due to Queen Alexandra’s great love of flowers! .

Edwardian style gave way in the 1920s to an even more decadent style; Art Deco. The Art Deco movement celebrated the power of the machine, the Post-War prosperity and the newfound freedoms women had. The styles tended to be starkly geometric, strong in design and featuring a central diamond with accent stones of a single color. 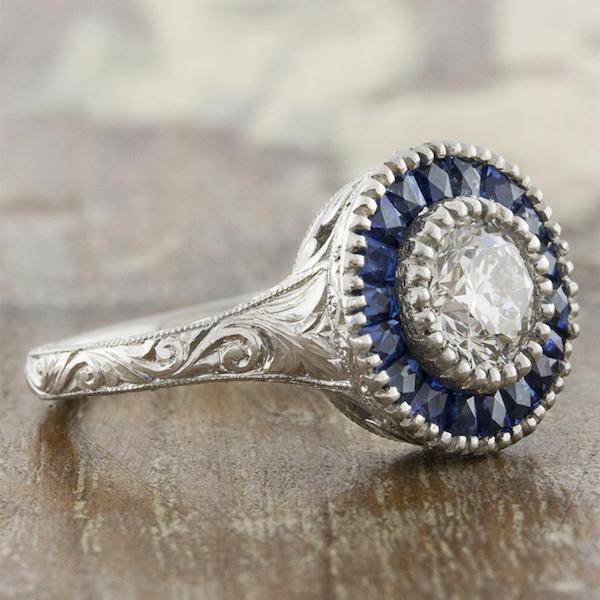 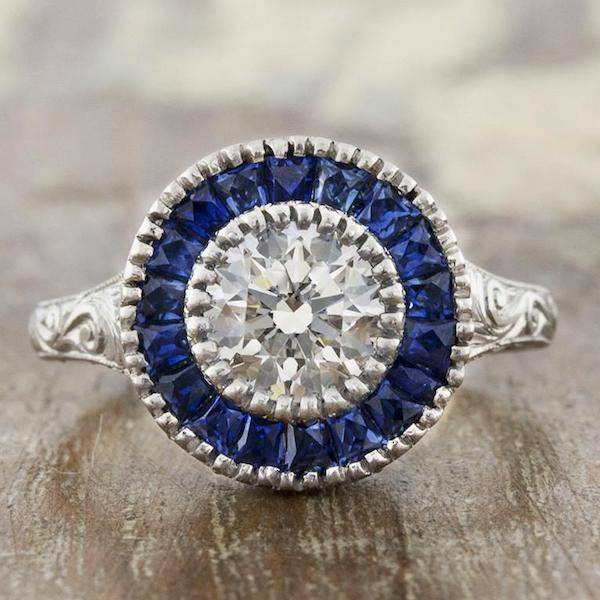 Our Joanna ring is a lovely modern take on the famous “target” rings that were so popular during the roaring ‘20s, its simple yet strong design prominently features a beautiful diamond flawlessly accented by channel set sapphires.

Investing in a vintage ring can be an exciting prospect, but can also be fraught with some concerning pitfalls. Stones in vintage rings have often been replaced or swapped out, patinas can be falsely applied, and natural wear and tear can make settings unsafe. During the 18th and 19th century many stones were also unethically sourced, and metals were mined using non-eco friendly methods, however purchasing a vintage ring does mean that you giving an existing ring another life, which is a great way to lessen the environmental impact vs. creating a new ring.

Deciding on a vintage-inspired ring allows couples to enjoy old world charm, romance and glamour, all the while knowing that the quality of the materials is only the highest, the settings and manufacture are state of the art.