Our studio is open for in-person and virtual appointments. Contact us to schedule a viewing.

Home What is a Step Cut Diamond? - Ken & Dana Design

What is a Step Cut Diamond?

When you hear the term step cut, it’s actually describing a family of different diamond shapes, the most famous of which is the Emerald cut. Step cuts have a long history as stunning cuts for diamonds and have been a perpetual favorite for diamond engagement rings. In recent years, step cuts have surged back into popularity for engagement rings, and we’re covering all the reasons why including tips on choosing a step cut diamond.

A step cut diamond is usually a square or rectangular shape with facets arranged as parallel lines to one another on all four sides. The facets tend to be larger than in brilliant cut diamonds and because of their arrangement, they look like steps. When talking about step cuts, a reference to a “hall of mirrors” effect is often used. That describes the repeating look the cut accomplishes when viewed from the large, flat facet on the top of the diamond.

The most commonly known step cut is the emerald cut. Named after the gemstone it was created for, the emerald cut has a long, rectangular shape and truncated corners that form an octagonal appearance. An emerald cut diamond is often considered to have a very sophisticated look due to its clean lines. 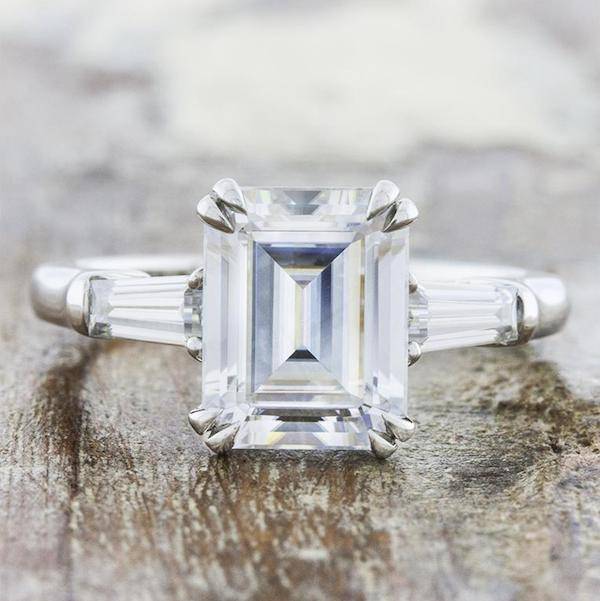 Second in popularity to the emerald cut is the Asscher cut, which is also known as a square emerald cut. Just as the name suggests, the Asscher cut diamond looks exactly like the Emerald cut in structure but in a square shape. The Asscher cut features large step cut facets and a high crown giving it a unique windmill appearance when viewed from the top. With deeper trimmed corners, the Asscher cut also creates an octagonal look but typically has more brilliance than emerald cuts because there’s more depth to the stone. 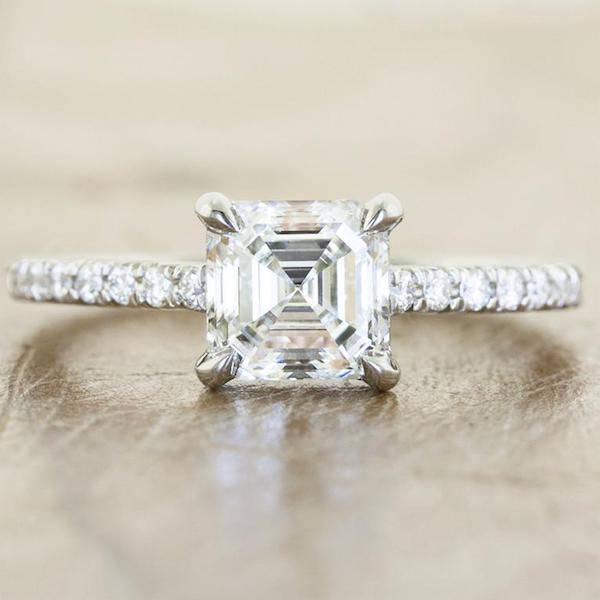 Baguette cut diamonds are typically used as side stones or lined up in a glistening row as an eternity ring. Just like the emerald cut but with fewer facets, its rectangular proportions create a thinner looking stone. The baguette cut does not have truncated corners, instead it has pointed edges. These diamonds don’t have as much sparkle on their own, but they are perfect for enhancing larger center stones in an engagement ring. 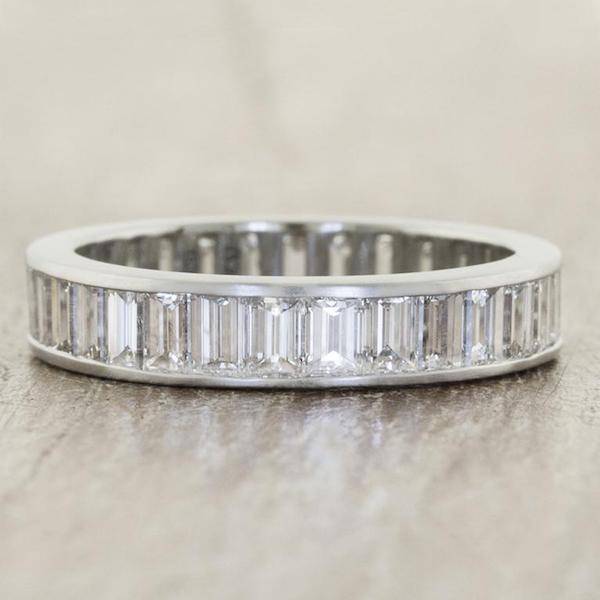 The History of Step Cut Diamonds

As one of the oldest diamond shapes tracing back to the table cut of the 1500s, the term “emerald cut” was adopted in the 1920s. Because of its massive popularity, jewelry of this time came to be characterized by the use of emerald cut gemstones. The cut continued to be refined and standardized in the 1940s, and now is one of the sleekest choices for a diamond engagement ring.

Step cut diamonds emerged on a large scale during the Art Deco period. A modern movement from roughly the 1920s through the late 1930s, it was characterized by bold geometric and architectural qualities being used in art, jewelry, and design. Clean and streamlined shapes prevailed with an emphasis on simplicity and symmetry.

Just prior to this period, the Asscher cut was designed in 1902 by famed diamond cutter Joseph Asscher of Holland. Descended from a long line of jewelers and diamond cutters, Joseph Asscher obtained a patent for his cut to protect from others replicating it, making it the first patented diamond cut ever. The Asscher Diamond Company held the patent until the start of the Second World War, making them the only purveyors at the height of popularity during the Art Deco era.

The baguette cut was the only actual diamond cut of the step cuts to emerge during the Art Deco period. The baguette cut was the strictest departure from traditional round cut stones that had been dominating jewelry. With few facets, straight lines, and sharp corners, baguette cut diamonds required the highest quality craftsmanship as their simplicity allowed for flaws to be seen much easier than in other cuts.

After World War II, steps cuts went into sharp decline in popularity as a return to traditionalism emerged. With it, many high-end jewelers put huge marketing dollars behind a modern brilliant round cut diamond, changing the landscape for what was desired in an engagement ring. Today, step cuts are making a big comeback as the appeal of their elegant lines and sparkling beauty are hard to deny.

Clarity, cut, and color are the most important aspects to pay attention to. Since step cut diamonds have a large, open table and fewer facets than other types of cuts, it’s much easier to see inclusions. For this reason, higher clarity grades are much more desirable and necessary for the diamond to exhibit a clear beauty. We recommend a minimum clarity grade of VS2, but most likely, you will need a VS1 or better if you want an eye-perfect stone.

The cut grading is not officially provided by your lab certificate, so you’ll have to rely on your eye to determine the best sparkle and brilliance from your list of options. The Cut grading for step cuts is obliquely described in your lab certificate as polish and symmetry, and you will want both gradings to be Excellent (EX) or Very Good (VG).

As for color, you will want a higher grade as compared to a round brilliant cut. This is because step cuts are made like an open book, where any slight color or inclusions are laid bare for all to see. To begin, any body color within a fancy shape (any shape that isn’t round) is likely to appear more prominently. Second, the brilliance of a step cut is comparatively lower than those of brilliant cuts, and lower brilliance translates to revealing more about the stone (think of brilliance like a mask that distracts your eye from actually seeing everything about a diamond). So if you like a G color round brilliant diamond, you will want to consider an E or F color to get the same look.

Don't know where or how to start? Our guide will show you how to budget, hone in on a style, choose a stone and more.

Diamonds need not be complicated. Learn about the difference between lab and natural, cuts vs. shapes and how to choose the best diamond for your dream ring.

Colored gemstones can be one way to create a unique engagement ring. Learn the pros and cons of different gemstones.